HAVANA – Men sit on the steps and play a hand of cards, women chat outside barred windows, stray dogs missing tufts of fur trot by.

Taxi drivers call it the last stop in Havana.

Up the steep concrete steps, a multi-generational family of seven shares a pastel blue apartment and the basic rations common in Cuba, including a sparse and potentially unclean water supply that sloshes around in a dark, old cistern just inside the doorway.

Cuba seems like a water-rich country, with abundant rainfall, rivers crisscrossing the island and groundwater that bubbles up in turquoise springs.

But it has always struggled to provide enough fresh water for its people.

Part of the problem is that the water isn’t where the people are. While Cuba’s capital city is in the wetter western part of the country, its population of over 2.1 million means that it has less water per capita than many other regions. Atop distribution problems, Havana and other parts of the nation also lack sufficient infrastructure and water-quality treatment. The strain has worsened in recent years due to drought. 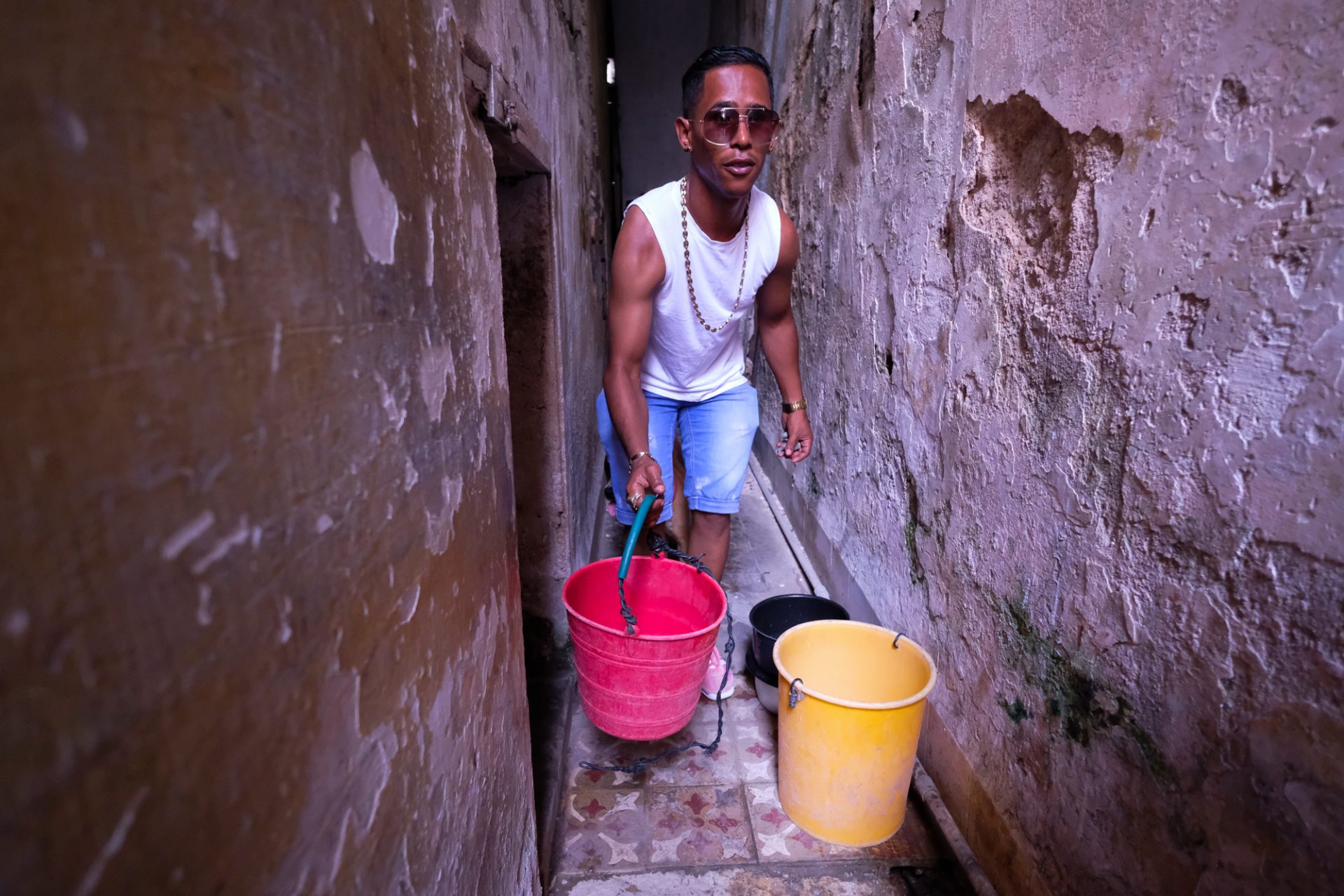 Eduardo pulls water from the cistern at his El barrio de Jesus María apartment for his family’s daily use. (photos by Danielle Veenstra)

Back inside the fading blue apartment, a bouncy 3-year-old cheers to the sound of Spanish-speaking trolls on the television.

His neighborhood, made up of 120 to 150 blocks, has an open-air market for meat and fruit and a mini supermarket. The outdoor market opens at 10, but locals get there at 9 to make sure they can get enough food for their families.

They live in southern Havana, on a street about a 20-minute drive from where tourists usually venture.

Those who live here don’t have cars, and the buses don’t come to this neighborhood. Residents walk 16 blocks or more to work, or ride their bikes.

The water in their makeshift well comes from government trucks, “las pipas,” when the neighborhood is in need.

The family rations 10 buckets a day per person.

Every workday, Yan Alvarez picks up a stack of white papers labeled “Despacho.”

Each signifies at least 10 places where he must pump water throughout Old Havana. Each home takes 20 to 30 minutes to fill.

“No llueve,” says the 40-year-old who has worked the job for seven years.

He pulls up his old truck to a pink apartment. Number 109 on a street called Aguacate. His wife, Leonida, guides him from the passenger side.

He drags the long hose from the blue tank into the home, snaking around the truck and into the house of Yanin Amaga, who stands graciously at the door.

Along with neighbors around the city, she says she looks forward to the day the water truck comes. Sometimes she must stretch her meager fill-up for as many as seven days before she sees Yan again.

“Café?” She asks, bringing him a small mug with a saucer.

As he sips his coffee, his 3-year-old son Alejandro, shirtless and wearing plaid swim trunks, hops out of the truck and trips in his blue rain boots.

All three share a room and a twin bed. Together, they make the equivalent of 20 Convertible Cuban Pesos a month as dance teachers. (About $23 USD at a recent exchange of $1 USD to 0.87 CUC).

Outside the family’s room, natural light floods from a roofless hallway.

To the right is the area the family calls the well, a crumbling cistern where they fill buckets of water for their daily needs: Cleaning. Cooking. Showering. Hand-washing. Dishes. And on Sundays, laundry. They boil water for drinking.

If the pipas come when they aren’t home, they must call and bribe the truck people with money to come back, Eduardo says.

In addition to their fill-up from the water truck, water also trickles in from the streets every day, topping off their supply.

Eduardo, dark haired and charismatic, crouches into the well. Placing a red bucket into the hole, he tugs up the splattering water. When the water level gets too low, the family members hoist it up with a cable.

He fills a pot and lugs it to the stovetop, turning the knob. As the gas kicks on, the blue light flickers. The gray water sizzles; floating specks of sedimentary rock, calcium and chloride swirl around.

Outside the Aguas de la Habana, where Yan and the other Las Pipas drivers refill their water tanks, workers in rain boots and long pants twist a rusty wheel.

Water spouts into four trucks simultaneously. It cascades down the sides and drips onto the road. Not all fills the yellow, blue and green tanks; some is lost in mud puddles on the street. All over Cuba, water is also lost through leaking pipes, adding to the problems with water supply.

The smell of gas permeates the air as a blue truck with a dolphin on the back hums by. It holds 8,000 liters. The other trucks hold 10,000. Some 12,000. Each heads throughout the city to homes in need of water. Families are encouraged to boil it for safe drinking.

Outside a home down the street, two men wear navy shirts that read “Aguas de la Habana.” Prying up a sewer hole with a lit cigarette between his teeth, one of the men shakes his head. There are 20,000-liter pipas, too, and they go straight to the hotels, he says.

While Cuban residents ration, tourists drink bottled water by the liter and take hot showers as if they’re at home.

The Cuban government has been working to build new water supply infrastructure around the country. But it hasn’t been enough for people in Havana and other cities.

“Taking the water from here to there, that can solve the problem. But for a while,” he says. Without a more holistic solution than the pipas, “soon everyone will be in scarcity.”

Back at the apartment, the water is still bubbling on the stove. Elena grabs a handkerchief and carries the steaming water to the cement staircase to cool. They can drink it in two hours.

She grabs a lid to one of the water buckets and uses it as a cutting board. She wraps her fingers around a handle-less knife and chops tomatoes with the blade, her curly dark hair framing her face.

She tosses a tomato slice into the air. Her pit bull Mentira jumps up to catch it.

She grabs a handful of black beans and dips them into the water to wash, holding them out in her palm. The color contrasts with the turquoise on her nails.

I love my country.

Elena waits for her water to boil.

Wildlife advocates say illegal hunting and sales of tortugas – and other endangered species – are related to poverty. Can shoppers help save these endangered sea turtles?  Read More » 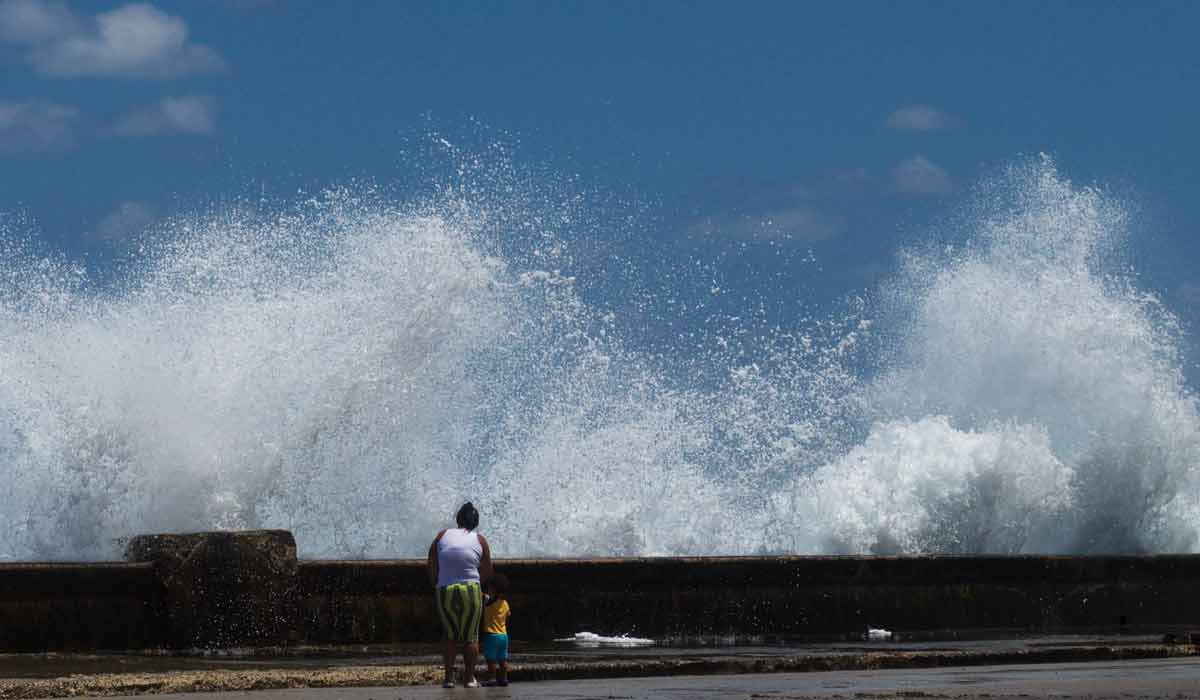 The issue of climate change is not in question in Cuba – for either the government or the people. Residents say more-frequent breaches of the Malecón are among everyday impacts from a changing climate. Read More » 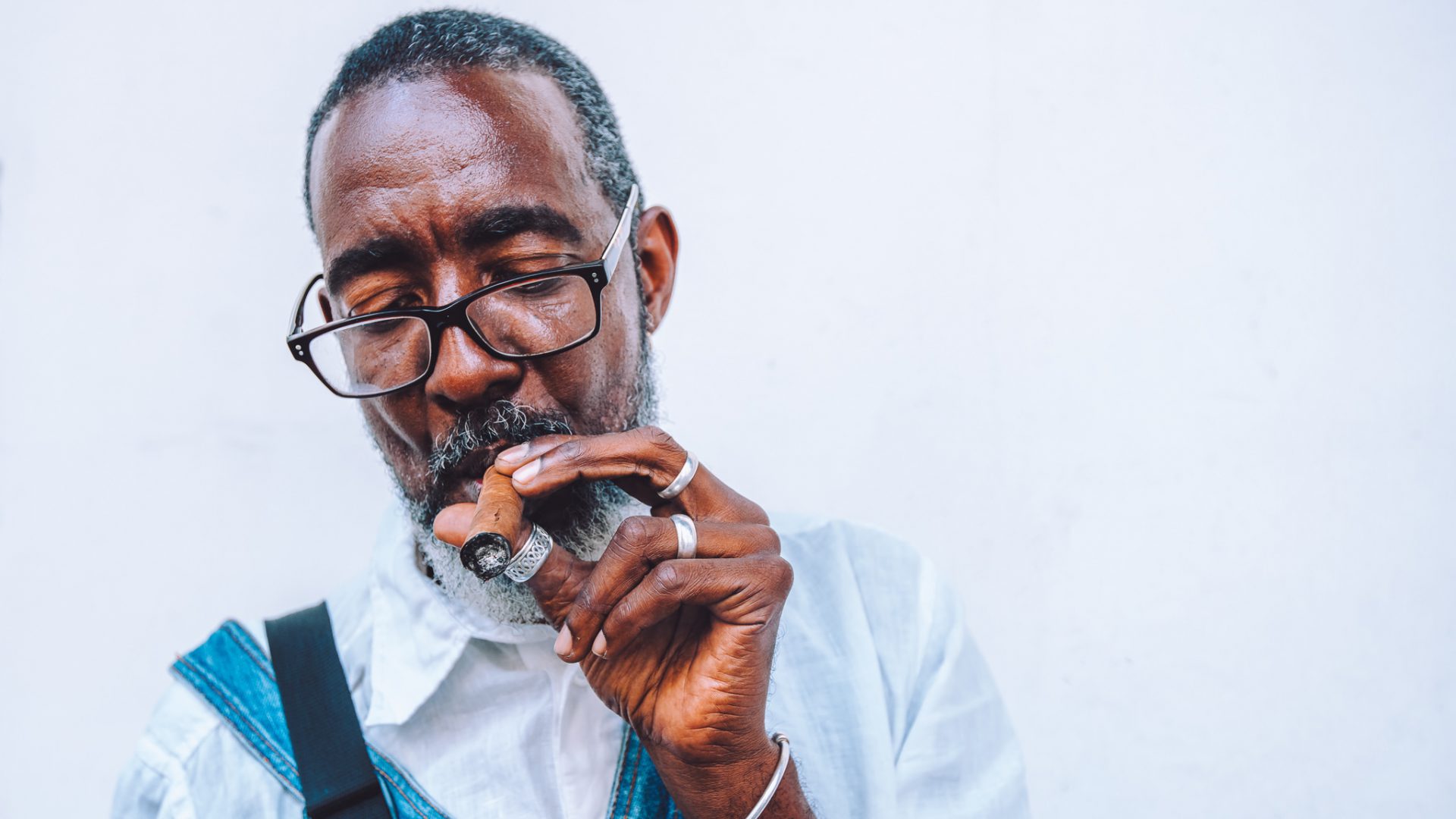 In Havana, we explore a thriving art scene and how Cubans reflect their lives through the works they create. Read More »